Goldilocks and the Three Bears review

So Ouat! is one of my favorite producers of children’s ebooks on the App Store.  None of their books are original (so far), but the treatment they give to classic fairy tales is consistently among the best the App Store has to offer.  True to form, Goldilocks is a high-quality treatment of the fairy tale we all know and love.  So Ouat! also offers some really cool educational features for parents who might want to turn these books into more substantial educational tools. 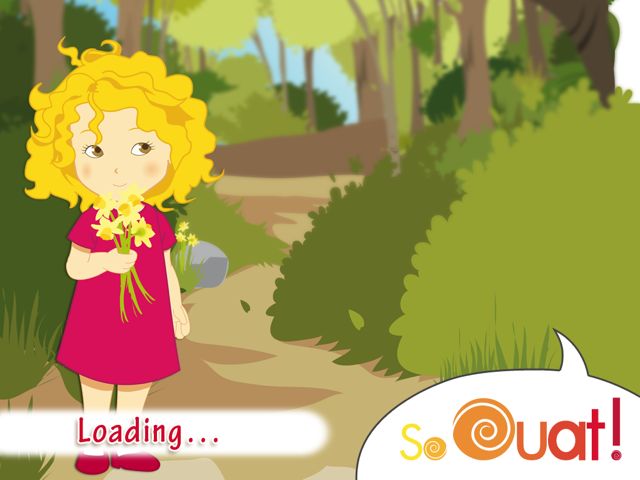 The artwork in Goldilocks looks like it was made with Adobe Illustrator.  It’s animated, which I don’t think Illustrator is capable of, but at any rate, it looks computer generated rather than hand drawn.   Generally speaking, this leads to inferior artwork that seems to lack soul.  Indeed, this book would benefit greatly from some quality hand drawn animation.  But, as-is, the artwork is adequate and won’t leave you feeling like the developer didn’t put in enough effort.  There are times, even, when you will be surprised at just how much emotion they manage to portray on Goldilocks’ simply-drawn face.

The only sound effects in this book are part of the user interface; when you touch a button or turn a page you will hear a sound letting you know that your gesture was registered.  As much as these effects are fairly immaterial and would probably go unnoticed if they were missing entirely, it is a testament to So Ouat!’s attention to detail and I suspect that they do have a subtle impact on my overall enjoyment of the book. 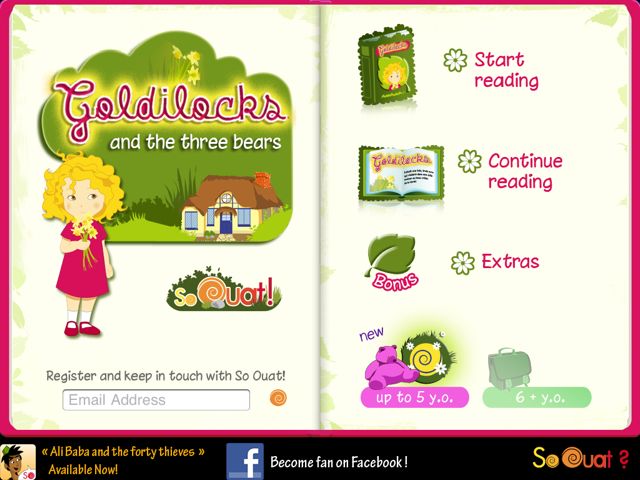 This is the same Goldilocks you grew up with.  Breaking and entering, destruction of property, theft of porridge . . . it’s all there.  The inventive format So Ouat! has used to present this ebook looks much like a traditional story book, complete with a faux binding down the middle of the book, separating the pages.  The pages are divided up with text on a portion of the page, and the rest dedicated to pictures.  This would be a rather pedestrian format for a children’s ebook if not for the fact that the pictures are actual fully-realized animations, and the action in the animations is perfectly coordinated with the narrator’s reading of the text on the page.  In addition, each word on the text portion of the page is highlighted as it is read, to help kids follow along and begin to recognize words.  It is a cool format that is abandoned in some of So Ouat!’s later ebooks in favor of a flashier method that focuses more on the animations and less on the grammar instruction.  Both systems are cool, and have their strengths and weaknesses, but I think I’m partial to this original format. 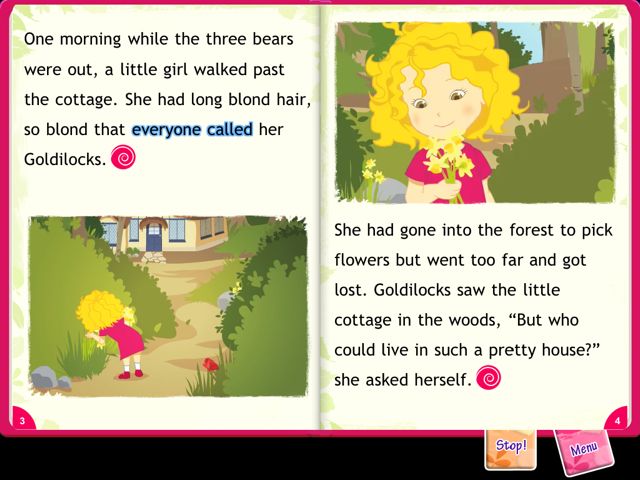 So Ouat! reuses the same narrators for many of their books.  I wish Lisbet, the narrator of this book as well as The Three Little Pigs was the narrator for all of them.  She is spectacular.  Julie Platus, who narrates many of So Ouat!’s other books isn’t nearly as good.  Her accent, which I can’t place, but I think might be French, is subtle and lovely.  And her voice is soothing and pleasant for children.  She is, I think, my very favorite narrator of all my children’s ebooks, which at time of this review number more than 100 (a fact I was a bit alarmed to discover a couple days ago). 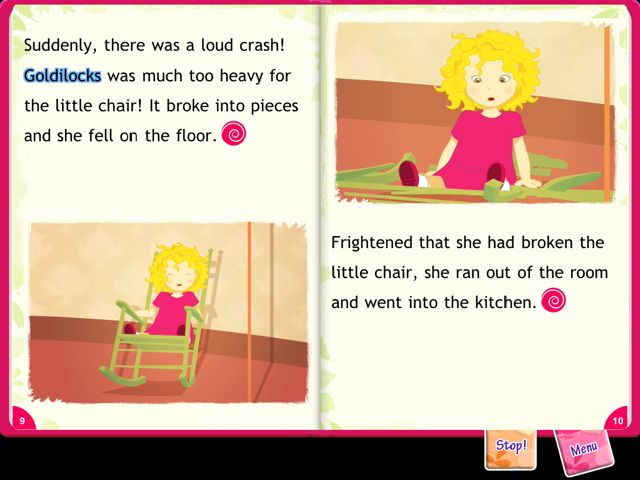 While many children’s ebooks focus their interactivity on fun extras like mini-games or adding sound effects to items when they are touched, all of the interactivity in Goldilocks is dedicated to educational pursuits.  This is something of a double-edged sword, I suppose.  On the one hand, the interactive features are very well thought out and executed.  On the other hand, my daughter has so far shown virtually no interest in them.

The interactive elements are primarily consist of grammar explanations , and there is a handy selector on the main menu page to designate whether your child is below or above the age of six, so the grammar lessons can be appropriately tailored.  For younger children, nouns in the text are underlined and, when touched, a picture of that noun pops up.  My daughter, who will turn five in a month, has never taken much of an interest in this feature, but I can see how, if encouraged, she might like it and it could be a pretty effective way of helping her learn words and practice spelling.  I think that it’s probably not too useful, though, until your child has developed a basic ability to sound out words on his or her own. 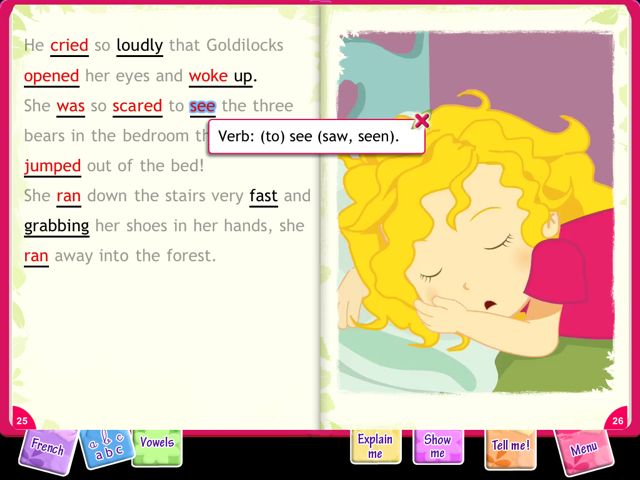 For older kids, the grammar lessons are cooler.  In addition to the underlined nouns, other parts of speech are underlined and highlighted in different colors and, when touched, an explanation of the part of speech is provided.  For example, touching the word “were” tells me that I am viewing the “Modal verb: (to) be (was/were, been).”  I am particularly enamored of this feature as I think that the American school system has rather largely (and appallingly) abandoned the teaching of sentence structure and advanced grammar.  I, for example, could not tell you what a definite or indefinite article was, or a preposition, or what subject-verb agreement meant, until I studied foreign language in college!  Having to learn these basic English concepts as an adult made picking up a second language far more difficult than it should have been.

Finally, the book can be switched from English to French, retaining all of the features, including the text, narration, and grammar lessons.  As a bit of a Francophone myself, I’ve found the So Ouat! books to be comically useful for me.  You can switch back and forth between English and French on any page.  So if you are trying to learn French, or if you just want to brush up, and you’re not embarrassed by reading children’s books, this is one of the best reading tools I’ve found.  You can turn off the narration and read the book in French mode, and any time you come across a word or phrase that you don’t know you can quickly switch to the full English translation, and then back again to carry on in French.  I don’t think the book was intended to be used in this way, but it’s super cool, nonetheless. 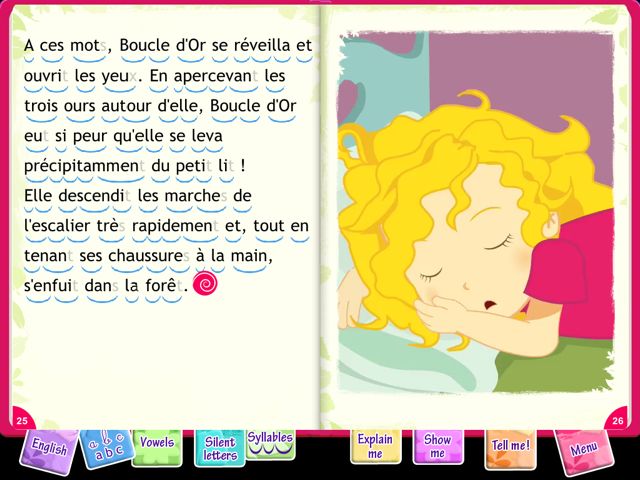 In spite of the lack of “fun” interactive features, this (and all of So Ouat!’s other ebooks) is among my daughters most frequent selections for story time.  The cute animations really bring the story to life, and the writing and narration are top-notch and very kid-friendly.

My daughter has chosen this as one of her three bedtime stories countless times since I purchased it.  I suspect I’ve sat through it at least twenty, but probably closer to forty times.  Fortunately, it remains a pleasure, thanks to the tight writing and excellent narration.  And, as mentioned above, if you happen to be a student of French, you may just end up using this book on your own long after your kids are snoozing away. 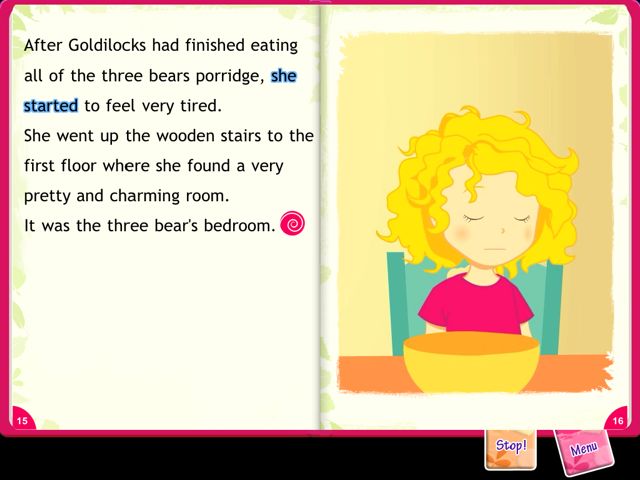 As I already mentioned, So Ouat!’s ebooks are some of my favorites.  More importantly, my daughter shares this sentiment.  Among So Ouat!’s offerings, Goldilocks is one of the best, thanks primarily to the lovely narration.  In addition, the book’s grammar lessons can serve as fun educational tools for parents who want their kids to take more from the experience.  They’re certainly more fun than your typical workbook.  And while the book lacks much in the way of “fun” interactive features, it does fine without them thanks to the engaging story and accompanying animations.  I highly recommend Goldilocks.It’s one of the best ebooks available on the App Store.