Elephant in My Pocket review

Elephant in my Pocket is an ebook with its heart in the right place, but with such amateur execution that it is impossible to recommend.  Everything from the writing to the artwork to the sound will leave you scratching your head wondering what the author/publisher was thinking.  What’s more, it’s a dud with children.  While their less critical dispositions will allow them to enjoy this one once or twice, they will almost immediately tire of it, and it will just sit on your device collecting the digital equivalent of dust. 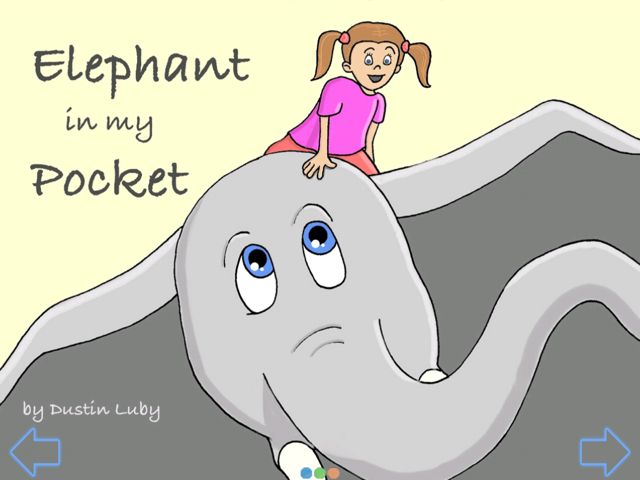 This entire book looks like it was created with Microsoft Paint.  I don’t mean to be insulting.  I actually would not be surprised to find out that it was in fact drawn with Microsoft Paint.  Moreover, the character designs, the settings, the animations, all lack creativity.  Every character is utterly generic.  I suspect that the author of this book illustrated it as well.  This was a mistake.  He should have enlisted the help of a skilled artist.

There is very little in the way of sound and music here.  A couple of pages have looped sound, such as birds chirping on the first page.  The sound bites are extremely short, so if you don’t turn the page immediately you will be quickly annoyed by the repetition.  A couple of the other pages contain sound effects, but most of these consist of spoken groans or cheers, and they are clearly not delivered by professional voice actors.

Elephant in my Pocket has a silly and charming premise.  Suzy, the story’s protagonist, comes across a full grown elephant while walking to school. 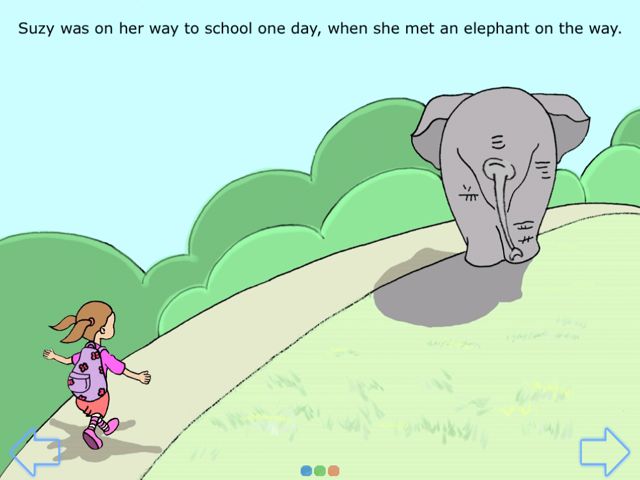 She plays with him for a while, but when she tells him that she needs to get to school he becomes Sad and asks her to take him with her.  This leads to by far the best part of the book, where the girl comically stuffs the elephant into her backpack. 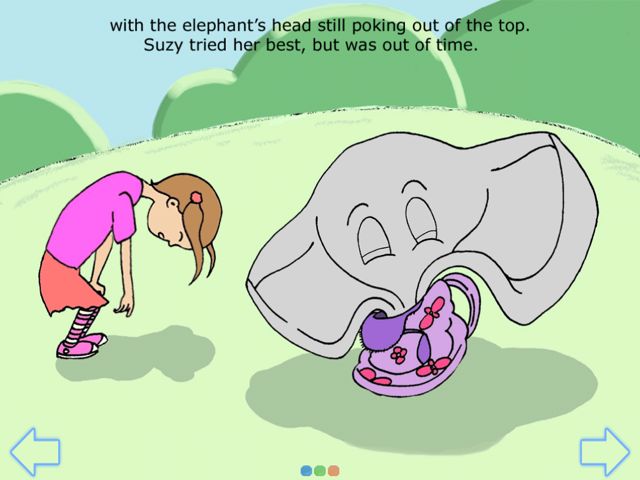 Unfortunately, the set up is wasted on the nonsensical and borderline inappropriate story that follows.  Shortly after Suzy arrives at school the elephant inexplicably jumps out of her pocket and kills all the school children. 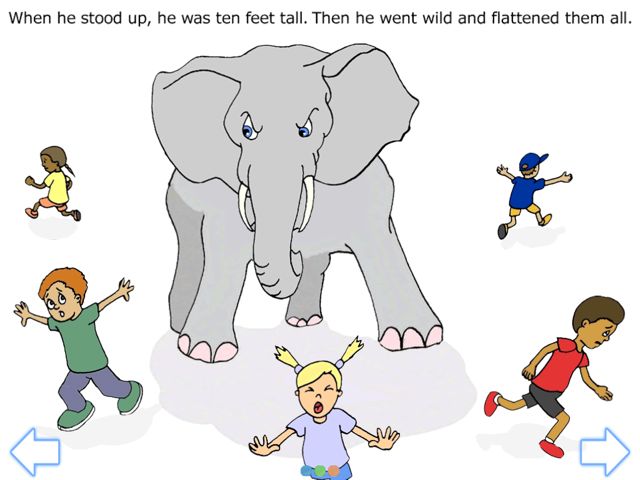 No, seriously.  He jumps out of her pocket and crushes all the other school children.

The author makes utterly no attempt at explaining why he behaved this way, nor what repercussions there were.  Indeed, there seemed to be none.  The book ends on the next page as Suzy and her now “best of friends” elephant are headed home and Suzy tells him, “I can’t wait for you to meet my mom.”  I think that the only reasonable way to interpret this ending, after what just happened, is that Suzy wants her mom to be killed.

At any rate, the story is just awful.  I believe that the author’s narrative was driven by rhyme.  The entire book rhymes Dr. Suess-style.  I say that loosely, because the rhyming is utterly unlike what we are treated to with Dr. Suess.  This author is trying to write poetry, as Suess did, but with no understanding of metric rhythm in verse (as Suess had in abundance).  What we get is a lot of forced rhyming and sentences that don’t flow together at all save for the final word of each sentence rhyming with the one before it or the one following it.  What’s worse is, as mentioned before, it seems that the necessity to find rhyming words actually drove the narrative, so the author decided where to take the story based on what words he could think of that rhymed with the sentence he had just written.  At least I hope that’s how he came up with a children’s story where a bunch of children are brutally (and inexplicably) killed for no apparent reason.

The narration in Elephant in my Pocket is about on par with every other aspect.  I assume that the narrator is the author of the book, and Suzy is voiced by his daughter.  That is sweet, but it doesn’t necessarily make for good sound production or voice acting.  Here the narrator is uneven and periodically inserts a jarring and nonsensical, “Hee hee hee,” into the story where it seems to have no place.  His daughter (or whoever voices Suzy) is okay, but her parts are poorly edited/mixed so whenever Suzy has speaking parts everything else goes eerily silent while her audio clips are played.  It sounds a bit like she was recorded on an old answering machine.  And while Suzy’s part isn’t played too poorly, it would have been better to find a girl a couple years older and easier to understand. 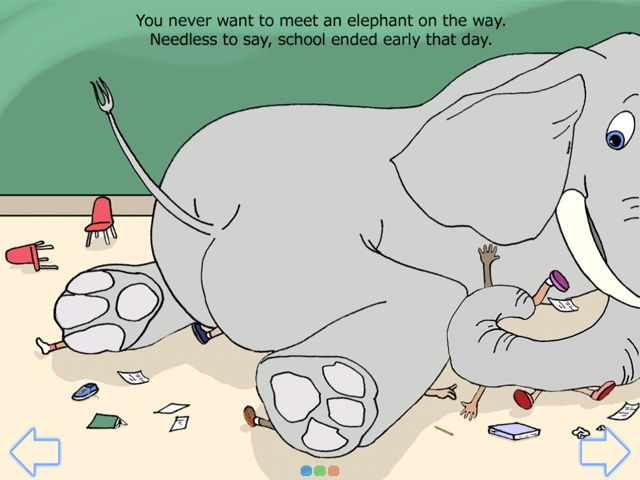 There is no interactivity to speak of in Elephant in my Pocket aside from touching the corner of the screen to turn pages.  There are a couple of places where you can touch the screen to get a sound effect, like touching the elephant to hear his trumpet, but for the most part this book is no more interactive than a paper-version would be.

At bedtime I hand the iPad to my daughter and she browses through the kids books which are organized into folders.  While my daughter didn’t express an immediate dislike for this book, she hasn’t once requested it aside from the first two nights after I got it.  Many of her ebooks are still regular selections more than a year after we purchased them.  It’s safe to say that this book is not one of her favorites.

While my daughter did not express an immediate dislike for this book, I was annoyed with it almost from beginning to end.  The forced rhymes and lack of any kind of poetic rhythm, not to mention the strange story, made the whole experience irritating.  And when my daughter selected the story for the second night in a row I had to struggle not to expel a sigh of disappointment.  Luckily, the novelty of it being a new book was quickly displaced by the book’s poor quality, and in the last six months or so I haven’t had to read it again until today in order to write this review. 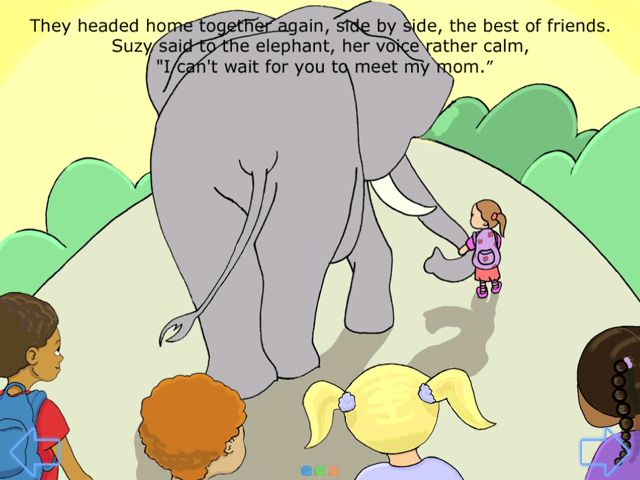 I don’t recommend this book.  You will hate it, and while your kids will almost surely not feel so strongly about it, they will become bored with it quickly.  And even if they didn’t, how much do they really need to be reading a story about a little girl bringing her pet elephant to school to kill all the kids, and then apparently home to do the same to her mom? Spend your money elsewhere.

A Hug and a Kiss! review
If you enjoyed this article, please consider sharing it!