This is a book that needs no introduction.  Unless you were raised under a rock, or perhaps in a box or with a fox, you have probably been exposed to this book countless times.  If you have kids, you have likely already exposed them to it.  If not, Oceanhouse Media’s iPad version is an excellent way to do so (it borders on child cruelty to deprive your children of Green Eggs and Ham, so if you haven’t introduced it already, get on it!). 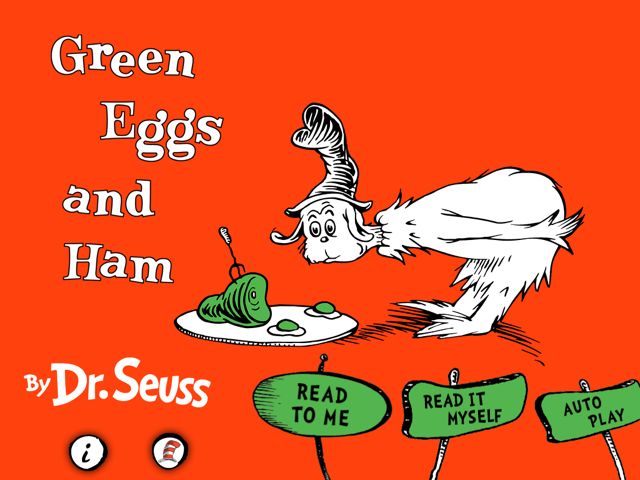 Obviously, the artwork for the iPad app is the original artwork from the classic Dr. Seuss book, and the scans are all high res and look fantastic on the iPad’s screen.  The presentation, however, is not quite the same as the dead-tree version.  Rather than shrink the pages down so you can view the whole page and consequently tiny text on the screen all at once, Oceanhouse Media has chosen to zoom in on only a portion of a page at any given time.  Finger swipes are used to advance, but it might take up to three or four finger swipes to get through an entire page.  The text is similarly broken up so the image showing at any given time corresponds to the text being read.  It’s a very effective system, and one that you will see repeated in every Oceanhouse Media treatment of Dr. Suess’s works (as of this writing there are twenty available, and almost all of them are excellent translations of the classic children’s books). 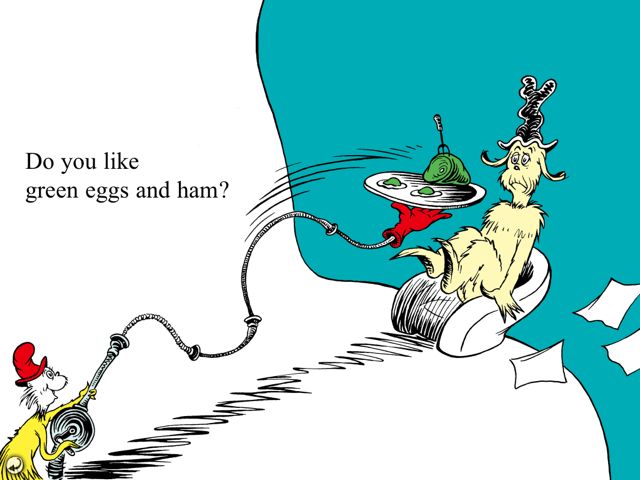 There is a barely audible score looping in the background while the book is read (it’s loud on the title page, though).  I didn’t even realize this until I deliberately paid attention for this review.  The music is unobtrusive and maybe adds to, but at least doesn’t detract from the reading experience.  There are also some minor sound effects peppered throughout the book.  It’s all high quality stuff that you’ll probably like, but if you want a more faithful adaptation you can always go into the settings menu and turn off the sound effects (which also turns off the music).

I think it unnecessary to even write this, but just in case you were raised in a box with a fox, here goes:  There’s an old grumpy guy (hereafter Curmudgeon) reading a paper when suddenly some crazy little guy zips by on the back of what appears to be some kind of jungle cat.  His name is Sam-I-am. 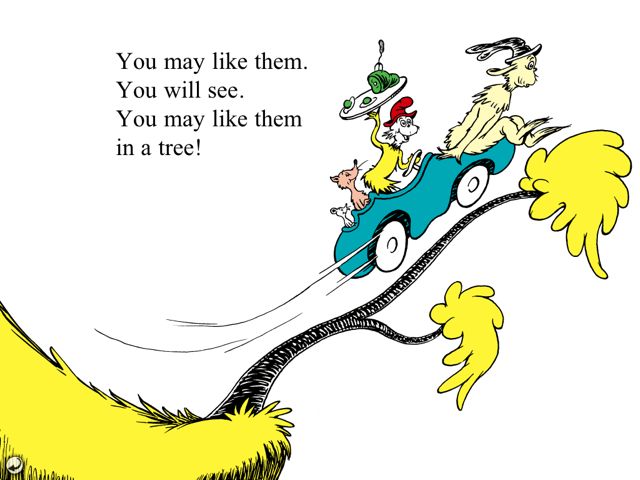 Sam-I-am wants Curmudgeon to try some green eggs and ham, but Curmudgeon is determined that he doesn’t like green eggs and ham, and will not eat them under any circumstances (Sam-I-am suggests a number of semi-hypothetical circumstances in which one might try green eggs and ham).  The curmudgeon’s frustration with Sam-I-am’s persistence builds throughout the book and eventually, at his wits end, he agrees to try them if only Sam-I-am will leave him alone.  He tries them.  And he likes them.  In fact, he would like them in every single semi-hypothetical circumstance to which I previously alluded.  Thanks Sam-I-am. 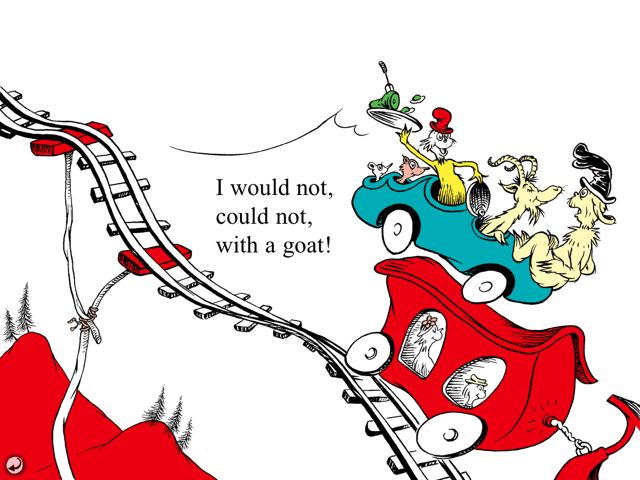 The narration is excellent.  The entire book is presented as a dialog between Sam-I-am and Curmudgeon.  Both voices are great.  My one complaint is that, in spite of the high quality of the narration, I would still prefer to be the narrator.  Several of my books, among them all of the Disney ones, have this feature and I love it.  As does my daughter.  I keep hoping that Oceanhouse Media will eventually, some day, finally add this feature.  But I’ve been holding out a long time and still haven’t seen it so I’m beginning to give up hope.  At least the narrators in this and most of their Dr. Seuss books are really good. 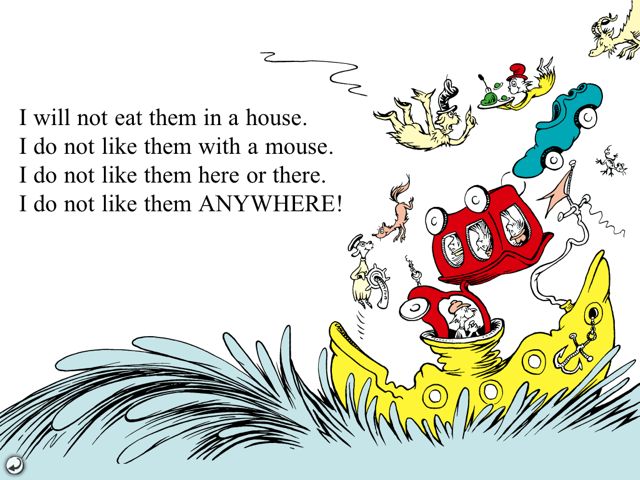 In terms of interactive features, if you’ve played with one of Oceanhouse Media’s ebooks, you’ve played with all of them.  They have developed a template for converting classic dead-tree kids books to the ebook format, and they never stray from the template.  Luckily, it’s a pretty great template, that offers some nice improvements over the paper-based counterparts.  Virtually every picture and every word can be tapped to hear it read aloud.  In addition to hearing the word read aloud, if you tap, for example, a fox, you see the word “fox” appear on the screen (as you can see in the picture below).  I think this can be a pretty effective way for kids to practice words and spelling, but I don’t have enough experience teaching kids to read with Oceanhouse Media books to say that with confidence.  It can’t hurt, though. 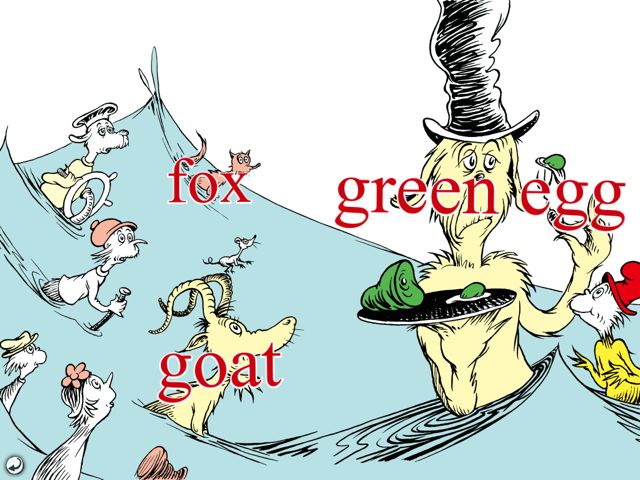 As nice as this system is, I consider it the bare minimum.  One of the ongoing problems with book publishers on the iPad is that they just don’t really know what to do with it.  So the iPad is most frequently used as a facsimile of dead-tree books with minor interactive features that have no impact on the story.  This is disappointing.  There are a few gems like Sesame Street’s Monster at the End of This Book, where the interactive features are woven into the story to such a degree that they become a part of the narrative.  Nevertheless, as tacked on as the features are in Green Eggs and Ham (and all of Oceanhouse Media’s Dr. Suess treatments), they are still well done for what they are, and potentially educational.

My daughter loves this, and almost every Oceanhouse Media Dr. Seuss ebook.  Dr. Seuss gets about 90% of the credit for this, but you gotta give Oceanhouse Media props for not screwing it up.  And even, I have to admit, against all odds, they’ve managed to improve upon the original.  Well done. 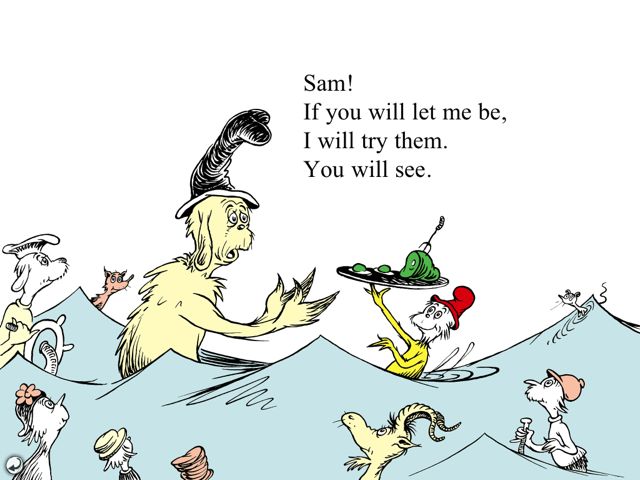 This is a must buy.  The regular price for these is $3.99, which is far less than the dead-tree versions.  The books sometimes go on sale for half-price.  During these sales you should really just buy every single one available, because they’re all great (except You’re Only Old Once, which is awful).  If there is no sale just pay the four bucks.  It’s worth twice that.

Goldilocks and the Three Bears review Winnie the Pooh – What’s a Bear to Do? review
If you enjoyed this article, please consider sharing it!