The Princess and the Frog review

Disney’s take on the classic The Princess and the Frog is entirely unfaithful to the source material.  It’s also really cute and compelling.  The iPhone/iPad ebook unsurprisingly follows the basic plot of the film, cutting and summarizing heavily to fit the whole thing into a ten-minute children’s book. Early versions of the book suffered from serious stability issues, but that seems to finally be fixed with the newest update. For the most part The Princess and the Frog is pretty successful, with excellent artwork and narration, and a few extra features that are cool for parents and kids alike. 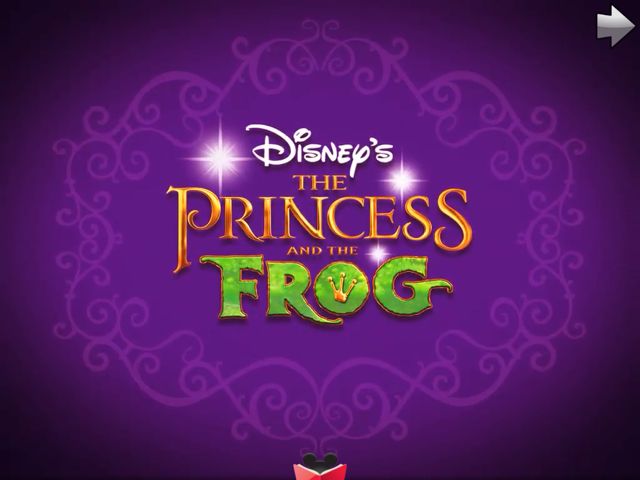 As near as I can tell all of the artwork in The Princess and the Frog is taken directly from the blockbuster animated film on which the book is based. Unlike the ebooks based on Dreamworks films, though, like How To Train Your Dragon and Kung Fu Panda, Disney has actually put a lot of work into the images to make them work well in the ebook format.While the Dreamworks books simply display stills from the films with some text pasted over the picture, Disney uses a variety of techniques to add depth and life to the visuals.Each page is initially displayed with interesting scrolling technique that gives the impression of a camera zooming in on the action.Moreover, the pages are frequently cut into layers, each scrolling at a different rate, which adds a pseudo-3D effect. In addition, most pages have a few animated embellishments such as shooting stars, or windows in the background that blink on and off, adding life to the otherwise still images. The end result is a book that seems to have been lovingly crafted, and flies in the face of the lazy cash-ins we’ve seen from Dreamworks. 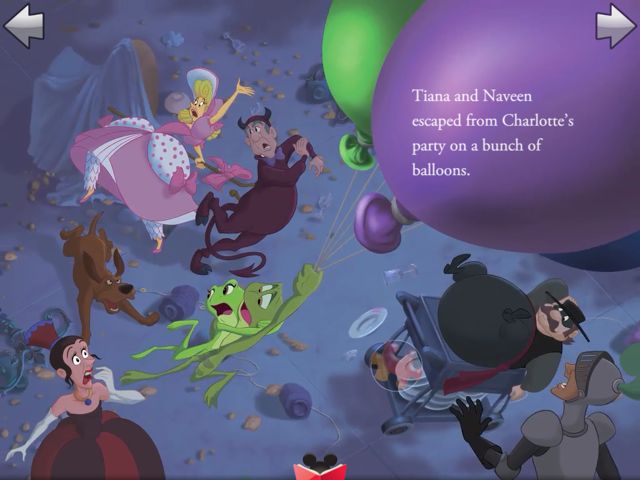 There’s not much to say about the sound effects and music. There aren’t any sound effects to speak of, except in a couple of video clips taken directly from the movie. The story pages, on the other hand, are accompanied by an effective and non-intrusive musical score. The music competently sets the atmosphere. And although I have nothing to gush about in the sound/music department, I have nothing to complain about either. I should note that as extra features you can view a couple of the musical numbers from the film, with both a small window showing the clip from the movie and a much larger space used to show the lyrics that highlight along with the music karaoke-style. More on this later.

Disney is no stranger to taking broad artistic license with classic stories. In the original The Little Mermaid, for example, Ariel fails to obtain the kiss from her beloved within and is therefore transformed permanently into sea-foam at sunset on the third day. Disney’s version of the story is, shall we say, tamer. 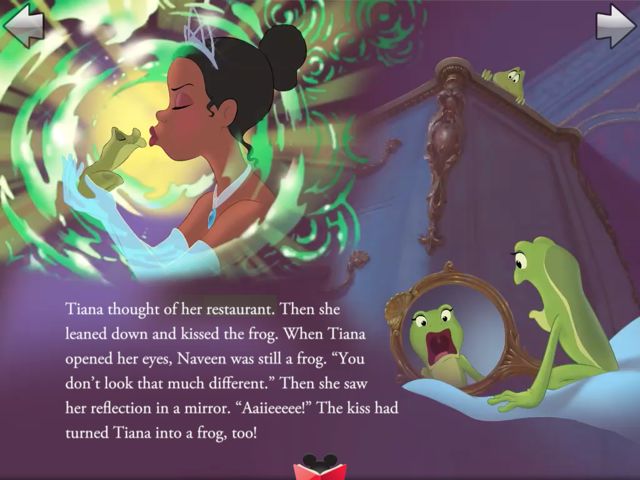 The Princess and the Frog takes this to a whole new level. The story told in Disney’s The Princess and the Frog shares virtually nothing with the original classic aside from the title. Fortunately, the story Disney came up with is clever and cute, and filled with inventive, entertaining characters. Expect a completely original tale, rather than a retelling of a classic, and you shouldn’t be too disappointed. 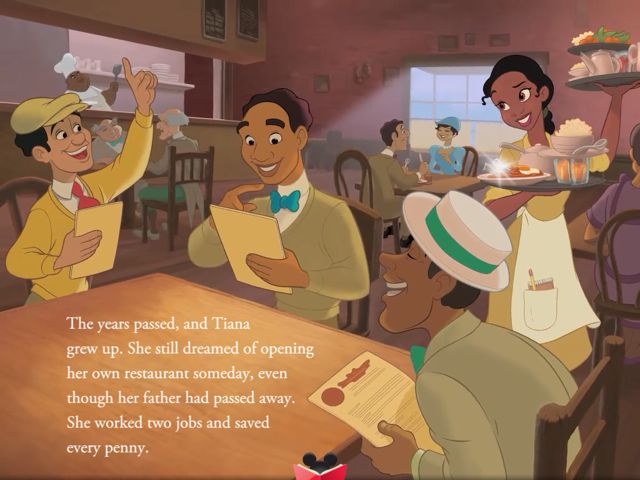 On the other hand, Disney is condensing an entire hour-and-a-half film into a ten minute story book. This makes for a somewhat disjointed story that jumps from event to event a bit too quickly and never really gives any one scene enough attention. If you haven’t seen the film, the ebook will feel a little shallow. If you’ve seen the film you won’t even notice because your brain will subconsciously fill in all the gaps. Your kids won’t notice this whether they’ve seen the film or not.

The narration in The Princess and the Frog is top notch–among the best I’ve heard in any ebook. The narrator herself is good, but the dialog is voiced by other actors (probably sound-clips taken directly from the film), and it is all excellent. If you choose to use the default narration, you won’t be disappointed. That is a pretty big “if”, though, because you are free to replace the default narration with your own voice. The interface for doing so is really well done, too. You record one page at a time, and before recording you get to listen to the default narration of that page so you can mimic what you like or improve on what you don’t. This feature makes me want to hug someone at Disney. I am sometimes out-of-town for weeks at a time. I love that while I’m gone I can, in a sense, continue reading bedtime stories to my daughter. Or, at least, she gets to hear my voice which, I hope, is comforting. If nothing else, it was worth it just to see her face light up the first time she heard the story being read automatically, but with my voice. Very cool!

The interactive features in Princess and the Frog are done well-enough, for what they are and basically follow the formula Disney established with its series of Toy Story ebooks. Kids are treated to a few games like coloring pages and jigsaw puzzles, as well as a simple whack-a-mole variation where they try to touch fireflies that fly erratically around the screen. The coloring pages are sort of awful, truth-be-told. There are only a handful of colors that can be used, none of which are the right colors for the picture. Or you can choose a “rainbow” color, which just fills in the coloring page with all the right colors, more or less like cheating. But kids don’t seem to mind these shortcomings in the slightest, so who am I to argue.

The puzzles are well done. Each piece clicks into place over the top of a transparency of the image being built. It’s far more accessible for children who are too young for a full-on jigsaw experience, but still fun for older kids. There are also a couple difficulty settings to choose from so you can split the puzzle into fewer or more pieces according to preference.

As mentioned earlier, kids can also watch clips of some of the musical numbers from the film. These are pretty well done. The video is low-res and is played in a tiny thumbnail of a window, but it’s good enough, and the small video keeps the file-size down. 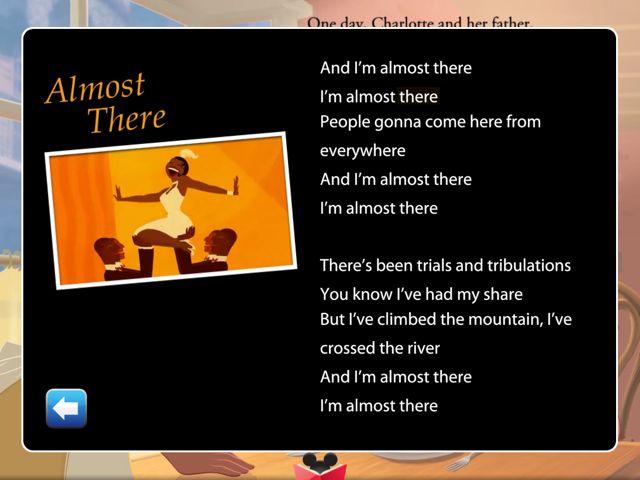 In the end, though, I’m fairly disappointed with the interactive features because most of them have nothing to do with the book. They are just separate interactive elements that might be fun, but they do not have any impact on the narrative. Too many developers are doing this. Rather than take advantage of what this new medium offers, they just replicate the paper-based book experience and then tack on some half-baked videogames. I expect more and as the medium matures I have no doubt that developers will deliver.

My daughter loves this book. Every night we read three stories of her choice (ebook or dead-tree) and this one has been her choice dozens of times. She loves the games (though at bedtime she’s limited usually to one or two puzzles, one musical number and a couple of the games, which are short). The story keeps her interest from cover to cover and, like I said, she really loves that I’m the one narrating (of course I could just read the story to her every night, but she much prefers my pre-recorded voice). For what it’s worth, my 3 and 10 year old nephews also love this book, so it’s definitely not just a princess book for girls.  Regardless of gender, your young kids will definitely love this book. 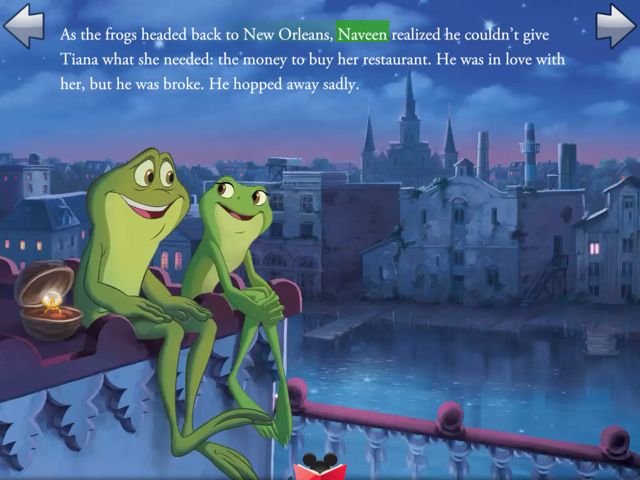 Frequently this category hinges on whether a kids book is overly long or overly obnoxious. This book is neither (so long as you don’t let your kids do every single interactive activity) and it actually has some fairly charming bits. Like I mentioned before, my daughter has selected this book at bedtime countless times, and I am never disappointed when she does.

Disney’s The Princess and the Frog is one of the most expensive ebooks in the App Store. Early versions were notoriously unstable. The book would crash completely at least twice every time I read it to my daughter. To make matters worse, it would not resume where we left off so each time it crashed we had to manually scroll through the pages to get back to where we were when it crashed. Finally, after many many months, Disney has released an update that seems to have fixed the instability, but it came at an enormous cost to parents like me who had spent the better part of an hour recording my own voice as the narrator. I recorded many pages multiple times to practice the various characters’ voices and get everything just right. When I downloaded the latest update, all of my work was erased. I’m now back to either using the default narration or rerecording the entire book.

With that said, if you’re buying the book new, that’s not likely to be an issue for you. The book is stable now, and judging by how long it took them to get this update out, I don’t expect another one any time soon, if ever. It is more expensive than the vast majority of books in the App Store, but still less expensive, and better, than most paper-based books. I definitely recommend it, especially if your kids are fans of the movie.