No adjective is better suited to Anomaly Warzone Earth than “polish”. On second thought, another equally appropriate description comes to mind: Fun. 11 bit studios has delivered one of the most impressive games on the App Store with Anomaly Warzone. Everything from the opening sequence to the ending credits has been lovingly crafted and finely tuned. 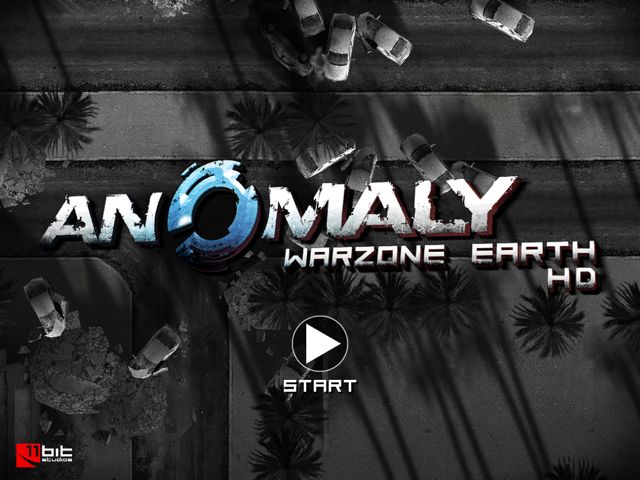 Anomaly Warzone is another iPad tower defense game, but make no mistake, this isn’t just another tower defense game.  11 bit studios has turned the tower defense genre on its head here. Instead of manning the towers, you control a military convoy trying to blast your way through enemy (a malevolent Alien race that has invaded Earth) controlled towers. If you’ve played Field Runners (and if you haven’t, you should), the mechanics are a lot like the exact opposite of that game.

The production values of Anomaly Warzone Earth are spectacular. This is a game that would be at home on a home videogame console or the PC/Mac. And, in fact, that’s where it started its life. I never played the PC/Mac version, but from what I’ve read most of the game came over to the iPad intact. And if there’s one thing on which everyone who has played both versions seems to agree, it’s that the iPad version manages to outshine it’s older sibling thanks to the iPad’s intuitive touchscreen controls. 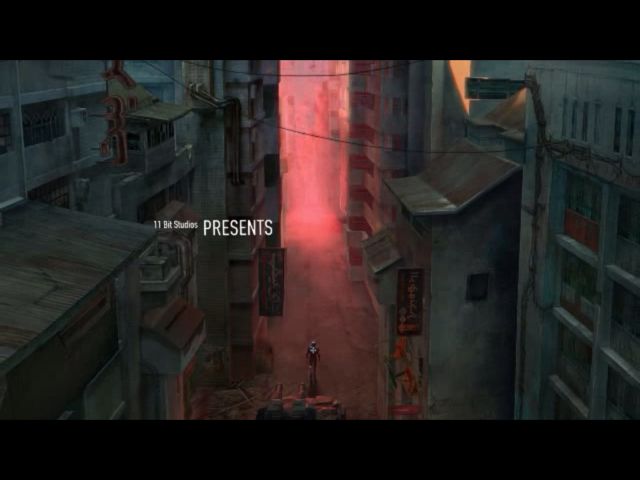 It’s worth noting that the user interface in Anomaly Warzone was designed by someone who should design UIs for a living. Everything from the main menu system to the tactical map manipulation (more on that later) is utterly streamlined, elegant and intuitive. And beautiful. My wife is a graphic designer, so I vicariously 😉 know good design. Anomaly Warzone Earth is very well designed.

The artwork in Anomaly Warzone is something of a mixed bag. The environments are superb, depicting in minute detail a nearly post-apocalyptic Baghdad, with crumbling buildings and smashed and burning cars littering the streets. The convoy vehicles (i.e, the characters you control), on the other hand, lean a bit toward the generic side. Anomaly Warzone’s unit design isn’t nearly as varied or interesting as what you’ll find in Fieldrunners, and it doesn’t come remotely close to the inspired design of the plants and zombies battling it out in Plants vs. Zombies. 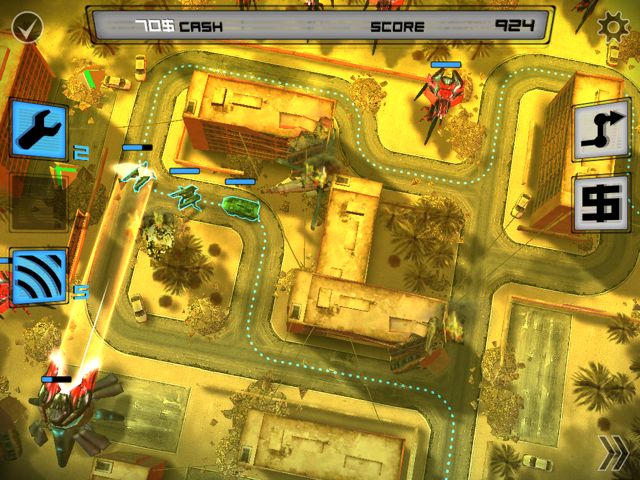 Nevertheless, the unit design gets the job done and, unless you really stop to think about it to, for example, write a review of the game, the uninspired design will probably go mostly unnoticed–especially since you’ll be feasting your eyes on the spectacular environments 11 bit studios has created here.

Another nice touch is the voice work provided by Guy Harris. He delivers the mission briefings, and a bit of helpful commentary throughout the battle (warning you, for example, when a unit is taking a beating and needs attention). He is tremendously talented, and I hope to hear his voice pop up in more products.

Each mission is initially laid out in a military-style briefing. After being updated with the enemy’s recent movements and activity, you will receive objectives from command headquarters. 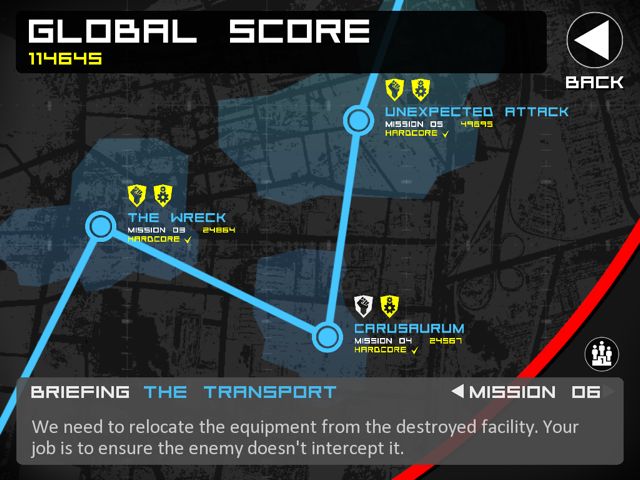 Next you must outfit your convoy. Unfortunately, 11 bit studios really missed an opportunity here to add some depth to the game. By the end of the game, when you have unlocked every type of vehicle, there are still only a handful of vehicle types to choose from (one of which is too weak to be of much use beyond the first couple levels). Add to that the very limited amount of money with which you start each level (each unit in your convoy must be purchased at the beginning of each level), and there isn’t much variety (and thus strategy) involved in constructing your convoy. This situation is slightly alleviated by the ability to upgrade the weapons/armor of each vehicle, but for anyone who has played Plants vs. Zombies (and if you haven’t, you should, immediately), this will still feel woefully inadequate.

Fortunately, convoy construction is only a fraction of the strategy equation. Once you’ve selected your units, you must then plan your route through the city streets. Air recon has provided tactical maps indicating enemy positions and types, so you must use this information, coupled with your own firepower choices, to determine which route through the war-torn streets of Baghdad will lead to the most kicking of Alien butt, while sustaining the fewest casualties. 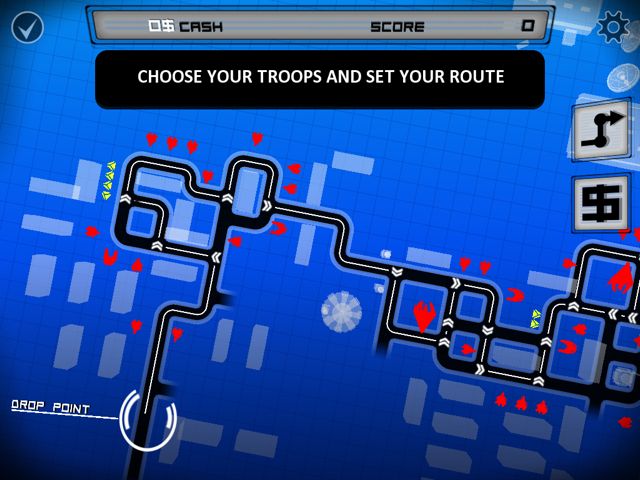 You’ll pick up single-use power-ups along the way (for some reason referred to as “abilities” in the game) that can be used to repair the damage your vehicles have sustained, or to provide decoys or cover to help get you through the hairiest situations. These power-ups add a bit of resource management to the strategic equation. 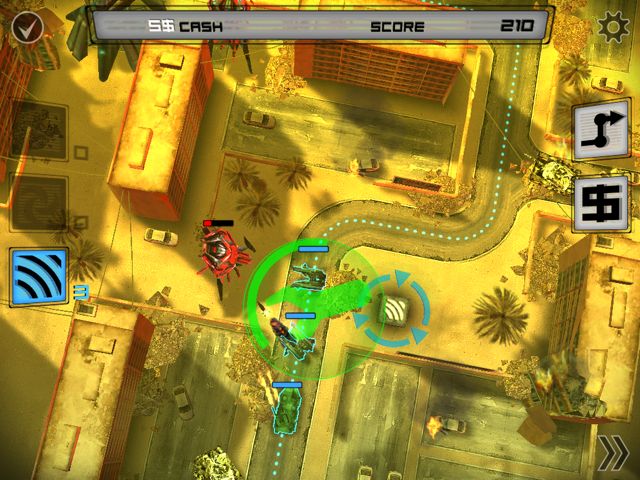 Anomaly Warzone is a lot of fun, which makes its short length all the more painful. I completed the main campaign in a single day, and I was not playing the game all-day long (despite what my wife would likely tell you). Finishing the campaign unlocks some challenge modes, but I really would have  liked the story to have lasted a lot longer.

With that said, I’d rather have a short, brilliant game than a long boring one. And Anomaly Warzone is pretty brilliant (note to developers: those aren’t the only two choices of course–long and brilliant would be another excellent option). Once you finish the campaign, you’ll probably be inclined to start from the beginning and play through the whole thing again on the hardest difficulty.

In short, the game isn’t long, but it is more than long enough to justify its cost. And it does provide some replay value. 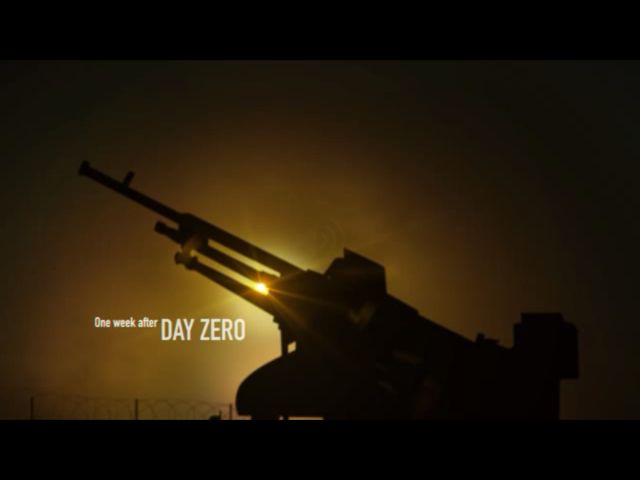 Although the subject matter and mild violence (weapons destroying vehicles and buildings) possibly make this one inappropriate for your youngest children, for everyone else, it’s a winner. In fact, chances are, when you’re nine-year-old kid wants to play Anomaly Warzone, he’ll first have to pry the game out of his mom’s or dad’s hands. Unless you have multiple iPads in the house (and multiple copies of the game), you’ll be fighting over this one. Anomaly Warzone Earth could stand to be at least twice as long, but at just four bucks it’s an absolute bargain. Buy it now and hope for an update or in-app purchase down the road to add more content. You’ll be glad you did even if more content never comes.

Max & the Magic Marker review
If you enjoyed this article, please consider sharing it!