TeachMe Kindergarten is a spectacular educational iPad app for kids. 24xdigital is one of the few developers of educational apps that has focused on teaching underlying concepts, rather than simply providing endless drills. But the real beauty of this app is that your child will want to be taught by it, because TeachMe Kindergarten gets another thing right. It’s fun. 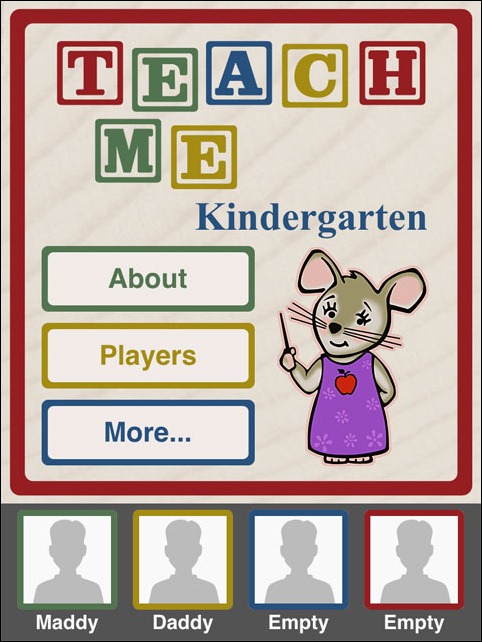 TeachMe Kindergarten will not win any awards for presentation. But it doesn’t really lose points either. The interface is somewhat dull, but not offensive. Navigation is, with a few minor exceptions, pretty intuitive. All of the text is written in large, san-serif fonts that are easy to read and will appeal to kids. All-in-all, TeachMe Kindergarten could benefit from a UI makeover, but it is perfectly useable, and your kid won’t complain about the design shortcomings. 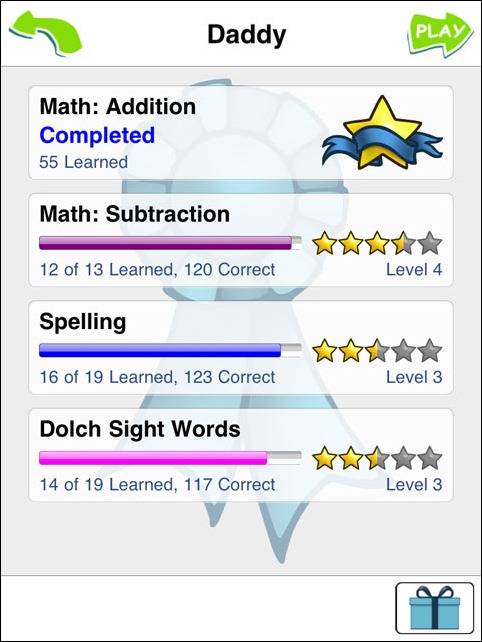 When you fire it up, TeachMe Kindergarten presents you with the title/user-selection screen. The app saves the progress of up to four players, and the current version has the option to lock user creation/deletion with a PIN. I wish more developers would consider the typical behavior of young children with curious minds and implement this feature. I love letting my daughter, nieces/nephews, and their friends use the wonderful apps on my iPad. But it’s no fun to fire up Plants vs. Zombies only to find that my user profile and the fifteen hours I had put into the game (it’s addictive!) no longer exists.

For every three questions answered correctly (this number can be changed in the settings menu) you earn a coin. The coins can be spent on stickers that can be applied to static backgrounds, or on fish and items for an aquarium. The aquarium is pretty cool. The fish swim around and you can drop pellets of food into it and watch the fish go after them. 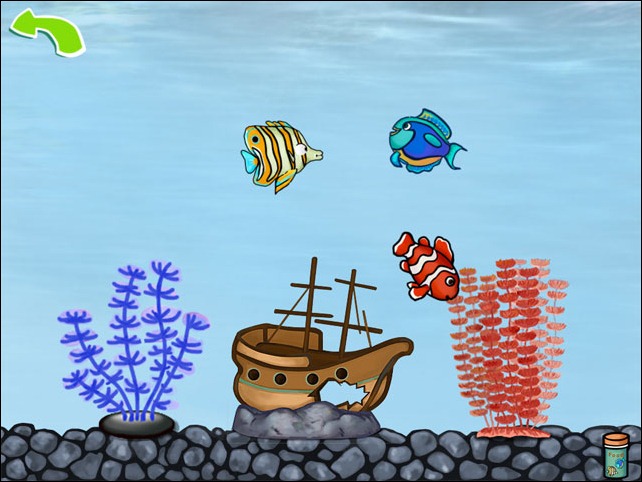 The backgrounds are comparatively weak. The available scenes include a beach, a reef, a pirate cove, a city street, and a farm. Stickers can be purchased to spruce up the scenes, but most of the stickers are pretty generic and their sizes tends to be nonsensical (the pumpkin sticker, for example, is approximately the same size as the sheep sticker). My daughter doesn’t seem to mind, though, judging by the number of stickers she has purchased with her coins to decorate the backgrounds. 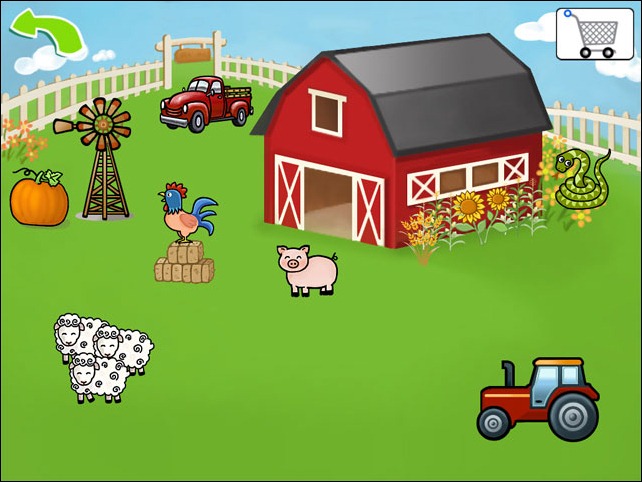 As mentioned in the presentation section, the artwork in TeachMe Kindergarten is largely forgettable. If you’ve seen clipart, you know what to expect.

TeachMe Kindergarten’s sound is superb in its breadth, if not its polish. Every single problem is spoken to the user. And there are literally hundreds of problems. This is accomplished by having the computer construct sentences by putting together various sound recordings, much the way a GPS tells you to turn on a particular street. So it’s not always pretty. But it’s not bad, and it really helps to keep your child interested.

The math, reading, and spelling drills that make up the bulk of the TeachMe Kindergarten app are very well done, and drilling obviously has its place in childhood education. But what really makes TeachMe Kindergarten stand out is the addition of subtle extra touches added throughout. For example, when presented with a math problem, your child doesn’t just see the equation or even a simple visual representation of it.  If the problem is 9-4=, your child will see nine objects that can be physically dragged into a container (to subtract them one-by-one from the scene) after which, tapping on the remaining objects one-by-one causes the teacher to count them aloud, “1, 2, 3, 4, 5 . . . .” It is an amazingly effective method to help children grasp the concept of addition and subtraction at a surprisingly young age. 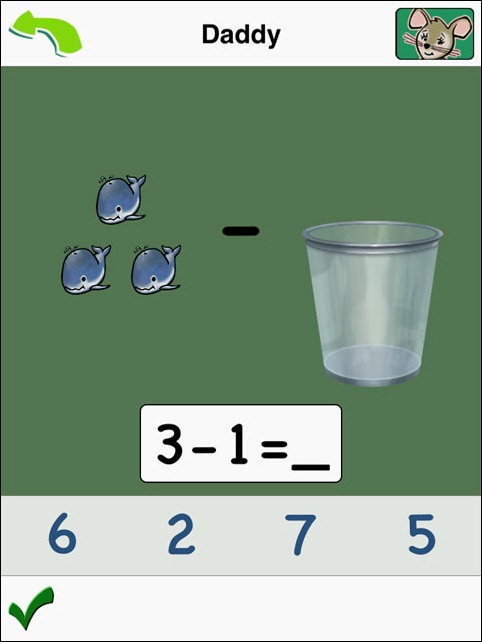 And once your child chooses the correct answer, the teacher doesn’t just say, “Excellent!”  She says, “Excellent, nine minus four equals five.” While the teacher occasionally sounds a bit robotic, she has context specific responses like this for every single problem. The speech engine that 24x7digital put together for this app is really impressive.

I had never heard of Dolch sight words and had to look up what they are. I’ll save you the trouble. In 1936 Dr. Edward William Dolch compiled a list of frequently used English words based on an examination of contemporary children’s books. The Dolch word list contains 220 “service words” and 95 nouns that children must be able to quickly identify in order to achieve reading fluency. Many of the words cannot be sounded out using simple phonics (e.g., could, who, four) and must be learned by sight, hence the term “sight words”. I have no idea how thoroughly children’s academic institutions have embraced Dr. Dolch’s methods, but the words on his list make a pretty compelling argument in and of themselves.  You can see the entire list of words here.

TeachMe Kindergarten’s method of Dolch word training is simple and very effective. The screen is divided into four boxes, each of which contains a single word. The teacher will then say, “Find the word _______.” Only one of the boxes, of course, contains the correct word, which can be selected by tapping on the appropriate box. 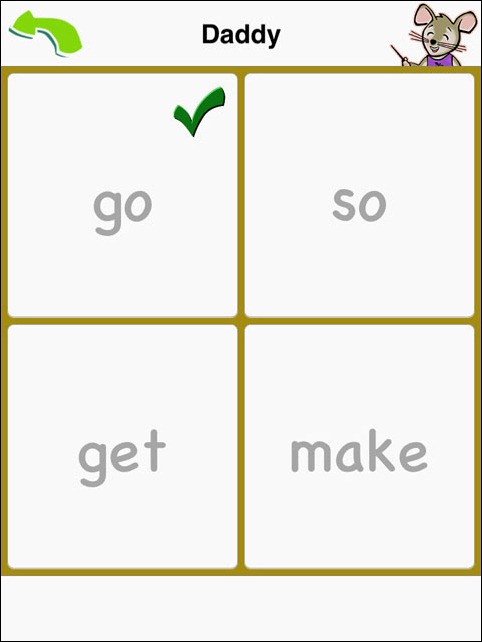 When the correct word is selected the teacher says something like, “Good job! You found the word ______.” The other three boxes, while incorrect, are still filled with Dolch words. And when one of them is selected, the teacher will say, “That’s the word ______, find the word _______.” So the child will have another chance (as many chances as it takes) to select the correct answer, but each wrong answer provides even more Dolch word reinforcement. It’s another example of 24x7digital nailing the details and not just the basics.

Spelling is handled simplistically, but I doubt it could be made much more complex for this app’s target age-group. A word is presented with a missing letter and a corresponding image.  For example, a drawing of a jellyfish will be displayed alongside the word _ellyfish. Then the teacher will say, “Find the missing letter for the word ‘jellyfish’.” In the beginning every spelling word follows this pattern, but as your child advances the difficulty ramps up a bit. Letters will be left off the end, rather than the beginning, and eventually your child will be given words with the vowel left out of the middle of the word like “z_bra” (zebra) and “wh_le” (whale). 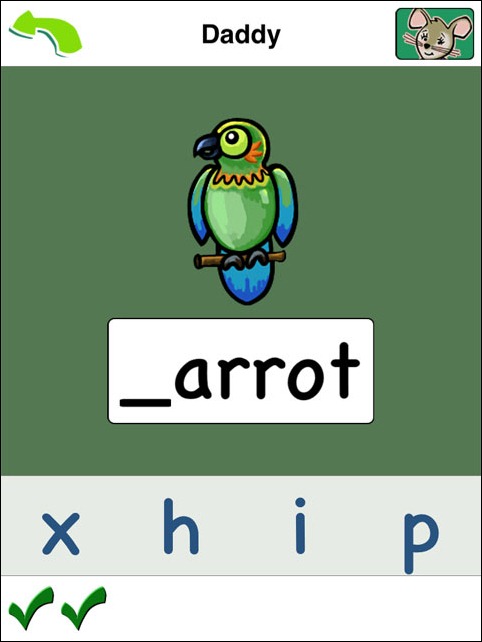 Frankly, I think that the spelling section is teaching more about sound-to-letter phonetics than spelling, but that’s okay. That strikes me as a far more important skill for a kindergartener to have anyway.

Hours. Hours is the unit of measurement by which I must gauge the time my daughter has spent with this app. And quite frequently she has sat down, started this app, and solved number/word problems for more than an hour at a time—all entirely of her own accord. It’s amazing. 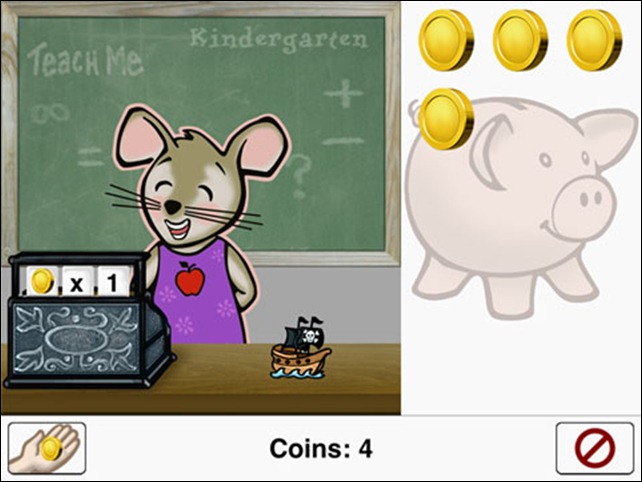 This is a pretty innocuous app for adults. You won’t mind spending time with your child on this one. As mentioned earlier, the artwork is not flashy or inspired, but it’s not offensive either. There is no music at all, which eliminates the possibility of tremendously annoying music. And the whole package is so effective, that you’ll really enjoy watching your child enjoy learning.

If you have a kid around 4-6 years old, get this app. It’s very, VERY well thought out. 24x7digital has developed some superb teaching tools. But the most effective teaching tools in the world can’t teach a thing if the user doesn’t use them. That’s not a problem here. This app is fun. Your kid will want to use it.

iLearn with the Mighty Jungle: Animals! review
If you enjoyed this article, please consider sharing it!